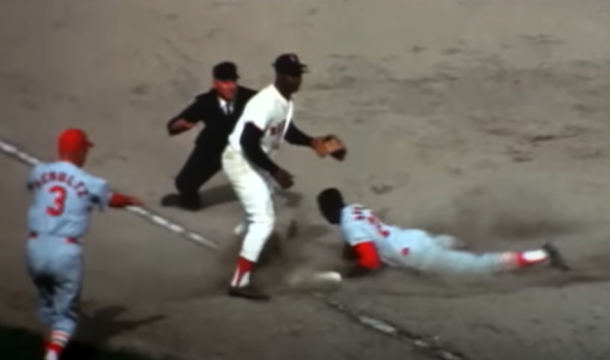 Lee must have been a heckuva job because Brock was inspired to try out for the professional league after helping Southern to win the NAIA championship in his junior year. Brock was selected to play on the U.S. team in the 1959 Pan American Games.
Brock tried out with the St. Louis Cardinals in 1960 and ended up as a free agent with the Chicago Cubs.
He made his debut in 1961 and made an immediate impact with his great speed and base running skills.
In 1964, Brock almost caused a rebellion when he was traded away to the St. Louis Cardinals for a popular Card white pitcher named Ernie Broglio. (The trade of Brock for Broglio proved to be one of the most lopsided deals in baseball history as Brock would go on baseball supremacy while Broglio’s injury prone career ended abruptly.
Brock has received numerous attributes since since his passing and for those who didn’t witness his greatness on the field, here’s a brief summary:

AWARDS
1968  The Babe Ruth Award (as the outstanding player in the 1967 World Series)
1974  The Sporting News Player of the Year
1975  The Roberto Clemente Award (for best exemplifying the game of baseball on and off the field)
1977  The Lou Gehrig Memorial Award
1978  The National League designated the Lou Brock Award (for its annual stolen bases leader)
1979  National League Comeback Player of the Year
1979  The St. Louis Cardinals retired Brock’s jersey, no. 20
1979   The Baseball Hall of Fame
The Hutch Award (for the player who best exemplifies the fighting spirit and competitive desire of Fred Hutchinson)
1983  Inducted into the Louisiana Sports Hall of Fame
1992  Inducted into the Missouri Sports of Fame
1994  Inducted into the St. Louis Walk of Fame
1995  Inducted into the Arkansas Sports Hall of Fame
1999  Ranked No. 58, The Sporting News 100 Greatest Baseball Players
Finalist, the Major League Baseball All-Century Team
2006  The Bobby Bragan Youth Foundation Lifetime Achievement Award (recognized for his accomplishments on and off the field)
2014  The inaugural St. Louis Cardinals Hall of Fame Museum (Brock was among the 22 former players and personnel inducted)

After a storied career, Brock became a minister who shared his success by investing into the lives and spirits of others.
from the cotton fields to a field of dreams, his was a life worth living.