Born October 31, 1971 in Greenwood, Mississippi, Ford starred in basketball at Amanda Elzy High School and was recruited by  Mississippi Valley State University head coach Lafayette Stribling.  He was an instant favorite in the Southwestern Athletic Conference as he led all NCAA Division I freshman in scoring during the 1989-90 season with 29.9 points per game average.
The SWAC Freshman of the Year was named to the Edd Hayes’ Black College Sports Magazine and became a three-time Sheridan All-American by the time he graduated. He and 6-11 center Mark Buford led the Delta Devils to back to back SWAC titles in 1991-92 and 92-93.
He had a sensational sophomore year, averaged 32.9 points per game, (second only to Bo Kimble of Loyola Marymount University) and became the first player in NCAA history to average 25 points per game in four straight seasons.
His 3,165 career points was 4th on the NCAA Div. I all-time scoring list (behind only Pete Maravich, Freeman Williams and Lionel Simmons).
Ford ended his college career with three consecutive SWAC Player of the Year awards and two trips to the NCAA playoffs.
Ford was the 32nd overall in the 1993 NBA Draft by the Philadelphia 76ers but ended up in just 5 games in the 1994–95 for the 76ers. He played six games for the Seattle SuperSonics in the 1993-94 season and ended up in the Continental Basketball Association with the Tri-City Chinooks. He averaged 22.8 points in 1993-94 and 24 points in the 1994-95 CBA season, and earned Rookie of the Year honors and named to the CBA All League Team. He played in the CBA All Star Game both seasons.
In 1995, Ford began a European odyssey when he signed with SD Huesca and averaged 25.1 points per game. He joined one of Europe’s elite teams, Greece’s A1 Ethniki the next season. He signed with Papagou and promptly led the league with 24.6 points per game and the team to its first seventh finish.
Diagnosed with leukemia at the beginning of the 1997-98 season, Ford honored his contract with the team even though his medical treatment cost him the whole season. He signed a one year deal with Sporting Athens, and helped the team finish in eleventh place, even though he was fighting the incurable disease.
Ford agreed on a two-year deal with Peristeri, another top contender and miraculously was able to average 22.2 points per game which helped Peristeri to a fifth place finish in the Greek league and a playoff spot.
In his first appearance in the European playoffs, he scored 20.7 ppg. in the 1999-00 Korac Cup. Ford was named the league’s MVP in 2000-01 as Peristeri ended up in third place and was selected to the All-Euroleague First Team.
In 2001-02, European powerhouse Olympiacos offered Ford a one year million-dollar contract.
He led the Reds to a Greek Cup trophy after the team had not had a winning season since 1997. 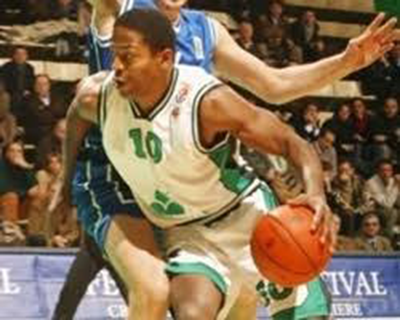 Ford had spectacular performances in the semifinals: 20 points, 7 assists and 3 rebounds against Bodiroga’s Panathinaikos, and 24 points, 10 rebounds, 3 assists in the finals to help defeat Maroussi 66-74.
He repeated as the Euroleague’s leading scorer with 24.8 points per game and was selected to the All-Euroleague Second Team.
Ford signed with the Italian League’s Euroleague contender Mens Sana Siena who qualified for the Final Four, as Ford averaged 17.9 points per game, and was selected to the All-Euroleague First Team. Ford averaged 19.1 points per game and Siena finished fourth.
Ford played the 2003-04 season in Scavolini Pesaro. Even though leukemia was in advanced stage, he still managed to score 22.2 points per game. He was recognized as one of the greatest Euroleague scorers of all time when he died at the age of 32, less than two weeks after announcing his retirement from the Euroleague. In 2004, the Euroleague paid tribute to Ford by naming the Alphonso Ford Top Scorer Trophy award to its leading scorer.