They Paved the Way in the Snow: First Black College Football Game 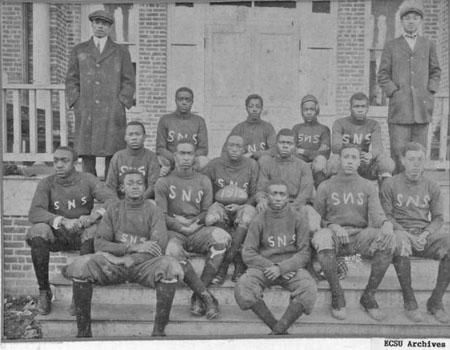 Ii was 1892, in a snowstorm in December, a brazen group of young black college students full of competitive fire, trudged their way from Charlotte to Salisbury North Carolina to play a game of football. It was the first time two black colleges got together in a game that had few rules and guidelines. Yet, the action was hot and heavy! It was not a typical Saturday afternoon for football. A torrid snowstorm blanketed central North Carolina and conditions were absolutely horrendous to even be outdoors. But, there was football to be played. Sound familiar?…could it have been last weekend? Maybe, but this took place over a hundred years ago. In North Carolina, the game of ’football’ helped develop a rivalry that became the milestone of black college football. T.M. “Ace” Martin, an acclaimed athlete of the time assembled a group of students at Biddle to challenge the men of Livingstone College, another Christian school who accepted despite having only begun assembling during the summer months.  Nevertheless, on Saturday, December 27, 1892, despite the oncoming snowstorm, the Biddle team traveled from Charlotte to West Monroe Street in Salisbury to talk on their challengers.

Even after the driving snow hit the area, it did not stop these Methodists and Presbyterians from ‘getting it on.” Under the rules, the game was played in 45 minute periods. During the first period, a Biddle player grabbed the ball and raced across the goal line for the first-ever touchdown, scoring five points. That was the only score in the first 45 minutes as it turned into a slushy tug of war. In the second half, the weather conditions actually got worse. Yet, they were still putting up a fierce struggle on the ice-caked field when the first-ever ‘controversy’ occurred. As history has it, a Biddle ball carrier was racing down the sideline and a Livingstone player named Captain Walker laid a vicious hit on him, causing a fumble. Another Livingstone player, W.J. Trent scooped up the ball out of the snow and sprinted what seemed like a tying score. Biddle protested vehemently that the man was tackled ‘out of bounds.’ and they should retain the ball. After a short discussion among the officials, they agreed. Biddle went on to shut out Livingstone, 5-0. Although that dispute caused a temporary halt to the rivalry, they played intermittently down throughout the years leading up to World War One, the Great Depression and World War