The Peters sisters began playing tennis for fun at the early  age of eight and ten years old and developed into a pair of heralded tennis champions from the 1930s until 1953.Their legacy began at Tuskegee Institute under legendary head coach Cleve Abbott.Known for their slice serves, strong backhands and quick chop shots, they dominated the American Tennis Association (ATA) which was created in 1916 to organize Negro Tennis Clubs across the country, and to provide competitions for black players.They had a 14 year reign in the ATA  including 14 doubles championships, a record still unbroken.Matilda was a two-time singles champion in 1944 and 1946 when she defeated the future star Althea Gibson in their only match.They were inducted into the:Tuskegee Hall of Fame, 1977US Tennis Association Hall of Fame, 2003

The Queen of Wimbledon

Althea Gibson, Florida A&M grad, was the black woman to compete on the world tennis tour and the first to win a Grand  Slam title in 1956.
Gibson was ranked in the Top Ten in the world from 1956-58 and no. 1 in 1957 and ‘58 by the United States Tennis Association.
Althea shocked the world when she swept her way to the 1957 Wimbledon Women’s Single Champion and repeated in1958.
After retiring from the courts, she took up golfing and showed her versatility by competing on the Ladies Professional Golf
Association tour.
She was inducted into the:
International Tennis Hall of Fame, 1971
US Open Court of Champions, 1994
Florida A&M Hall of Fame,  9994
SIAC Hall of Fame, 1994
Sports Hall of Fame of New Jersey,  1994
New Jersey Hall of Fame, 2009 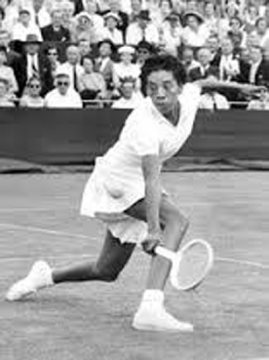 Bonnie Logan was One of the Best

Bonnie Logan was a product of the Durham/Hayti community where tennis was a part of the sports culture. She later won the Girl’s 14 & Under Championship in consecutive years and the Maryland’s Girl’s 18 & Under Championship.She became the top player on the Morgan State women’s tennis team and no. 2 in the CIAA Tennis Championships.Bonnie dominated the American Tennis Association during the 1960s and competed against the other top players like Althea Gibson. She captured seven Consecutive ATA Women’s Singles Titles and became the first African-American woman to play in a Virginia Slims Tournament. Bonnie was inducted into the 2009 class of the Black Tennis Hall of Fame, and the Morgan State University Varsity M Athletic Hall of Fame in 1983. 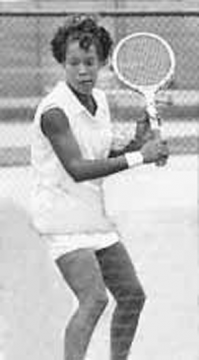